Finding cycle routes suitable for kids in London is not the easiest thing. One option is to plot your route using Google Maps’ cycling option, but you can’t really trust the recommended cycle path to be child-friendly. However, it is possible to cycle traffic-free in London, so check our nine family-friendly cycling paths suitable for even the youngest family members.

Types of places to go cycling in London

Safety is key when cycling with children in the city. But with several independent cycle networks operating with different signs and maps, it can be really confusing to plan a traffic-free cycle-route in London:

Our recommended cycle paths are often a mix of these different networks.

Cycle routes in London for families

Epping Forest is London’s largest green space and it’s a great spot for a long family cycle trip. Our recommended circular route takes your through the main part of the park on shared gravel paths. You’ll pass through ancient woodlands and idyllic meadows, so make sure to set aside the whole day and enjoy everything that Epping Forest has on offer.

Richmond Park is one of the most child-friendly parks in London with several family bike ride options. It’s less manicured than the Central London parks, like Hyde Park and Regent’s Park, but on the other hand, you get to see wild deer roaming freely!

If you’re not bringing your own bike, you can rent one from Roehampton Gate where they also have plenty of options for children including, seats, trailers and tag-a-longs. Check the official visitor map to make sure you stay on the designated cycle paths and remember that pedestrians have priority.

If you live in South East London, here’s a good one for you! Starting from Ladywell Station in Lewisham there’s a connecting chain of traffic-free parks going south along Pool River and Ravensbourne Gardens. Actually, you can cycle all the way from Deptford Creek by the Thames and follow the river south to Lower Sydenham. The route is called the Waterlink Way and Lewisham Council has made an excellent map highlighting the best cycling route, and how to negotiate the few points that are not traffic-free.

The Thames Path is our favourite family cycling route, although it can get really busy during summer weekends. Pedestrians take priority, and when cycling with small children it can be difficult to go slalom between everyone strolling along the river. The cycling route is not entirely traffic-free as you will have to use some side-streets here and there, but these are usually without much traffic.

If you’re interested in British maritime history, the route takes you past several points of interest like the Mayflower Pub, the Docks, Deptford Wharf, Cutty Sark and the Old Naval College. If you’re going with kids, stopping by Surrey Docks Farm is a good option, as well as the Children’s Gallery in the Maritime Museum in Greenwich.

The only issue cycling in Battersea Park is that there are so many cool things for kids to see that you’ll be tempted to stop all the time :-) From Go Ape and play areas to the Children’s Zoo and a Boating Lake, you’ll find plenty of kids activities to fill the day. Renting bikes is very expensive, but if you haven’t tried riding a recumbent before, this might be a good time to test it out! The park gets really busy during weekends, so make sure to stay on the designated paths when plotting your cycle route through Battersea.

We wouldn’t recommend cycling through Central London’s with kids, except for this specific mostly traffic-free route. Riding through London’s most scenic of cycle routes, you’ll be tempted to make frequent stops to absorb all the glorious Royal splendour. You’ll take advantage of Central London’s green belt, cycling through four Royal Parks; Kensington Gardens, Hyde Park, Green Park and St James’s Park. Rent a “Boris-bike“, keep your journeys under 30 minutes and you’ll get the most cost-efficient sightseeing trip you can get in the capital!

Little Venice does not look like the original Venice, but it’s a nice little neighbourhood with narrowboats on the canals and terraced Georgian and Victorian houses typical for the area. Regent’s Canal is very unique, and thanks to the towpaths that were once constructed for horses to tow barges we can now enjoy a wonderful traffic-free cycling route between East and West London.

The path is not exactly as wide as a boulevard, so be careful not to manoeuvre into the wet elements. You can’t be too much in a hurry cycling this route, so take your time and get off the bike if too crowded. We have just highlighted the cycling route from Little Venice to Camden Lock, but if you could like to continue on further you can cycle canalside all the way to East End and the Limehouse Basin by the Thames.

This is the longest family cycle route on our list, and it starts from the modern-looking Queen Elisabeth Olympic Park, featuring impressive venues like the London Aquatics Centre built for the 2012 London Olympics. The route takes you north following River Lea, which played a significant role historically as the border river between Saxon Wessex and Viking Danelaw in East Anglia. Luckily most of the cycle route is on the western side of the river, so you’re safe from bloodthirsty Vikings ;-)

On route to Waltham Abbey, a traditional market-town, you’ll pass a number of wetland reservoirs supplying London with freshwater.

This 10 km route takes you from Canary Wharf through Limehouse, Miles End Park and along Regent’s Canal before ending up in a circular route around Victoria Park. The path takes you through some very contrasty East London neighbourhoods, and you’ll get the opportunity to try one of London’s longest slides in Victoria Park’s playground. Be aware of a few road crossings, although you’ll mostly cycle completely traffic-free.

Can you cycle in London’s parks?

You can cycle on designated cycle paths in most of London’s parks. Some of the best parks to cycle in are Hyde Park, Richmond Park, Battersea Park and Regent’s Park.

Can you cycle on the pavement in London?

Cycling on the pavement is illegal under British law, and you risk getting a penalty by the police.

Can I cycle on the Thames Path in London? 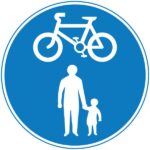 You can cycle on the Thames Path if it’s marked as a shared footpath (see image) or as a designated cycle path.

Can I cycle on the Southbank in London?

No, cycling is not permitted on the Southbank between London Eye and London Bridge. You can take National Cycle Route nr. 4 which is going mostly through quiet streets in paralell to the Southbank.

Is cycling with kids safe in London?

We wouldn’t recommend scooting through London’s busy streets with kids. But if you carefully plan in advance and make use of London’s green spaces, river- and canal-sides you’ll find plenty of traffic-free cycling routes safe for kids.

Where can I find traffic-free cycling routes in London?

Check the cycle route suggestions on LondonDucklings as well as the National Cycle Network Map.

Can I cycle through Kew Gardens?

No, cycling is not allowed in Kew Gardens.

Can I cycle through Hyde Park?

Yes, you are allowed to cycle on the designated cycle paths and shared paths in Hyde Park.

What’s the fine for cycling on a footpath in the Royal Parks?

Are the bike lanes safe for kids in London?

There are several official biking routes in London, and some of them include proper bike lanes. However, with the amount of traffic in Central London, our advice is to limit cycling with kids to traffic-free areas like in parks and on the Thames path.

13 brilliant things to do in Greenwich

Excellent Scooting Routes with Kids in...

Making Elderflower Cordial with the Kids