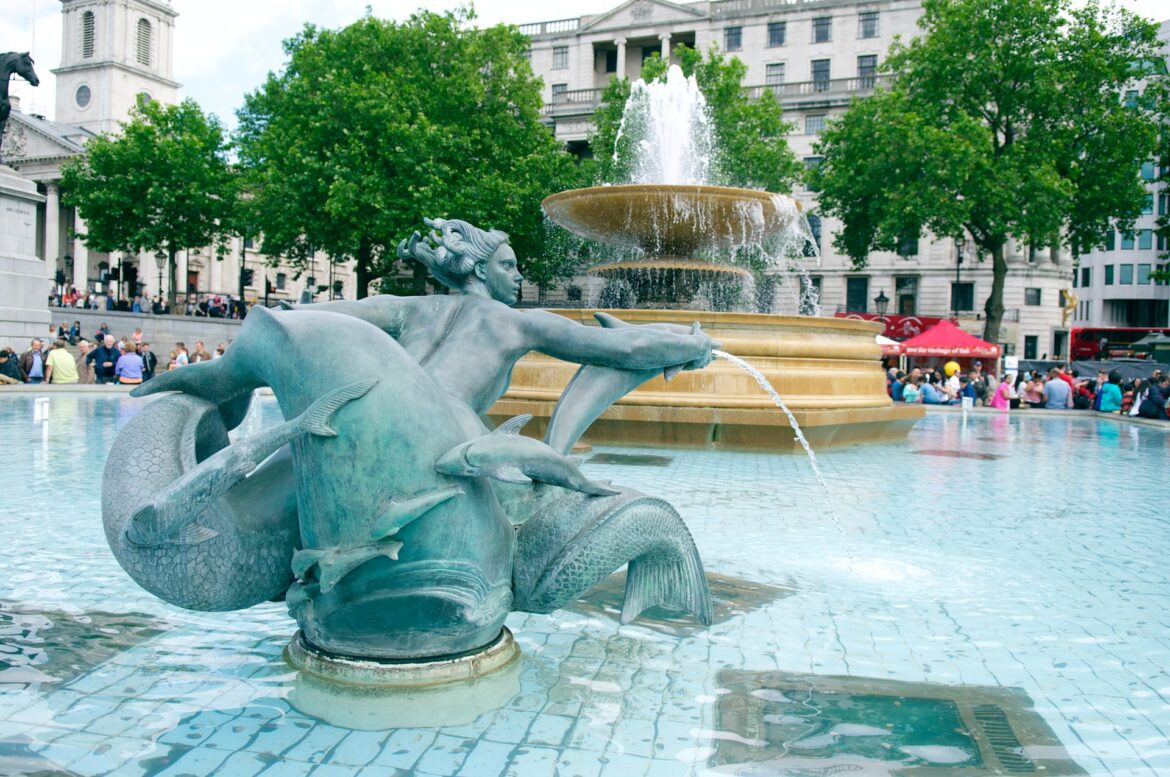 Trafalgar Square is one of the key iconic landmarks in London and is usually high up on the list of families looking for famous places to visit in London. Surrounded by world-renowned attractions, museums and entertainment areas, and of course, Nelson’s column, this is a great area to explore with kids.

What is Trafalgar Square famous for?

Trafalgar Square is one of the key public squares in London, located in Westminster. It’s often used for public events and is a hub connecting several important areas such as the Mall leading towards Buckingham Palace to the southwest. To the northeast, you’ll find the entertainment district around Leicester Square and West End, and overlooking the square is the world-renowned National Gallery. At the centre of the square, kids particularly love the huge lions guarding Admiral Nelson’s column.

The towering centrepiece of Trafalgar Square stands 169 ft 3 in (51.6 m) tall, with the much larger-than-life, 18ft 1in (5.5 m) statue of Admiral Nelson at the top. Nelson is one of the historical figures who kids love to hear stories about, so it’s a great opportunity to sneak a small history lesson into the visit.

Charles Barry, who designed the National Gallery and took over the layout of Trafalgar Square after Nash died, didn’t want Nelson’s Column to be here at all. He worried that it would distract attention from his Gallery building. Unfortunately for him, he took over after the foundations had already been laid, so he was stuck with it.

Construction started in July 1840, and the main tower was completed by the end of 1843. Nelson’s Column cost £47,000 to build in the 1840s, which is the equivalent of between £3 million and £4 million today. However, the public donations needed to build the tower ran out at the £25,000 mark, so the government took over the funding, and completion of Nelson’s Column.

The column is built in the Corinthian order, a style of ancient Greek and Roman architecture. It is characterised by slender fluted columns and elaborate capitals, which are decorated with acanthus leaves and scrolls.

The column is constructed out of Dartmoor granite and weighs around 2,500 tonnes. It was originally meant to be built entirely out of sandstone, but the plan was changed shortly before construction started.

The bronze reliefs on the pedestal each depict a scene from Nelson’s most famous battles: the Battle of the Nile, the Battle of Copenhagen, the Battle of Cape St Vincent and his death at the Battle of Trafalgar. They were not installed until 1849, and the metal came from French guns which had been captured and melted down.

For schoolchildren interested in history we recommend visiting the National Maritime Museum in Greenwich where you can admire Nelsons’original coat with the fatal bullet hole. You’ll find several interactive galleries at the Maritime Museum, great for all kids from toddlers to teens.

The 1,197-piece Trafalgar Square Lego set features the National Gallery, Nelson’s Column flanked by 4 lions, 2 fountains, 4 sculpture plinths, 10 trees, 6 lamppost, and a tiled baseplate depicting the square and road areas complete with 2 London buses and 2 black cabs. The included booklet contains information about the architecture and history of each structure, as well as historical facts about Trafalgar Square and its architectural heritage. This must be the ultimate gift to kids after visiting Trafalgar Square!

Is it a good idea to climb up to the Trafalgar Square Lions?

Even though it’s strictly not allowed, the famous lions of Trafalgar Square have been climbed on by generations of children. You might be tempted to help your kids climb up to get a closer look at the Trafalgar Square Lions, but we wouldn’t personally take the risk – especially with younger kids!

“…no person shall within the Square attach any banner or article to, climb or interfere with any tree, plinth, plant box, seat, railing, fence, statue or other structure whether permanent or temporary…”

There are four lions at the base of Nelson’s Column, and if you look carefully you’ll notice that while they look identical, there are subtle differences betw21045 Trafalgar Square was a 1,197 piece Architecture set released in 2019. Features the National Gallery, Nelson’s Column flanked by 4 lions, 2 fountains, 4 sculpture plinths, 10 trees, 6 lampposts, and a tiled baseplate depicting the square and road areas complete with 2 London buses and 2 black cabs. The included booklet contains information about the architecture and history of each structure, as well as historical facts about Trafalgar Square and its architectural heritage.een all of them.

Designed by the painter Sir Edwin Landseer based on an actual, if very dead lion, and cast by Baron Marochetti at his studio in Kensington, they were unveiled in 1867, a full decade after they were commissioned.

The lions are also not the ones originally planned. The commission to design them went to another artist, Thomas Milnes, but his designs were felt to be unfitting for the site, so Landseer was given the second commission to redo the work.

It’s said that the paws of each lion are not as graceful as the rest of the body as they were done last, and by which time the dead lion provided by London Zoo for the model had deteriorated rather badly.

None of the lions is individually named, but collectively they are often called the Landseer Lions.

Legend has it that the lions will come to life if Big Ben chimes 13 times.

Although cast in bronze, the original plans had called for stone or granite. Today it would be almost impossible to imagine anything but these magnificent 20 feet long bronze statues at the base of Nelson’s Column.

Admire the square from a fancy rooftop restaurant

Step away from the pigeons and crowds and admire Trafalgar Square from above. The Trafalgar St James hotel next to the square has a rooftop restaurant with amazing views. But it comes at a cost – a minimum spend of £50 per person is required, so make sure to make the most of the views!

Can you take a dip in the Trafalgar Square fountains?

Although you’re not allowed to bathe in any of the fountains, Londoners have been known to dip their feet on scorching days during summer. According to the bylaws governing the square:

Instead of letting your kids slip off their shoes and cool down in the pigeon-feathered waters, we recommend checking our overview of paddling pools in London; the nearby fountain square at Summerset House nearby is free and a lot of fun for kids.

The fountains were installed after the Square was originally laid out, for two very different reasons.

In part, it was to reduce the effects of reflected heat from the large expanse of paved surface, but the government was rather keen on reducing the space available for protests to gather in the Square.

The fountain centrepieces are not the originals though. The originals were removed in the late 1930s and ended up in Ottawa, Canada. The current fountain centres were designed by Sir Edwin Lutyens, and are actually memorials to Lord Jellicoe and Lord Beatty.

While you would not be recommended to drink from the decorative fountains, there were two potable water drinking fountains installed by the Metropolitan Drinking Fountain Association, a charity in 1960, to mark the Association’s 100th anniversary.

Although they fell out of use for many years, they were restored back to working order in 2009, but seem to be broken again.

A lamppost in the southeast corner of Trafalgar Square has an unusual claim to fame — it’s a police observation post, although many other people claim, erroneously, that it’s a police station.

It wasn’t there in the original plans, but as Trafalgar Square became a meeting point for political protests in subsequent years, it was decided that a police presence was needed in the Square to keep an eye on things.

Just before WW1, a temporary police hut was installed in the Square itself, but it was the General Strike of 1926 and the agitation of strikers protesting in the Square that encouraged the police to see a permanent station in the square. This hollowed-out lamppost is the result, but not after a very long process.

What happened to Trafalgar Square during World War Two?

Although Trafalgar Square was never hit by bombs during WW2, the roads around it were, so it was a very close-run thing. One bomb, to the south, came very close to Nelson’s Column, which would have been a significant propaganda victory had the bomb been just a few metres closer.

The Square was however used on several occasions to show off Allied weapons to the public and to raise funds for the war effort.

And of course, it was one of the major sites for the VE Day celebrations.

If you’re visiting London in December, you’ll get the chance to see the giant Norwegian Christmas tree in Trafalgar Square. In gratitude for Britain’s support to Norway during world war two, the city of Oslo ships a Norway spruce to London every year.

The lighting ceremony of the Christmas tree is attended by dignitaries like the Norwegian ambassador and the major of Westminster. It is a popular free event leading up to Christmas in London. The famous Christmas tree is also the most ridiculed tree in London, with Brits describing it as a “gherkin draped in lights” and a “cucumber”.

Building work in the 1950s on the south side of Trafalgar Square uncovered deposits left over from the last interglacial period when England was a much warmer country. Among the findings were the remains of cave lions, rhinoceros, straight-tusked elephant and hippopotamus.

So yes, at one point, hippos and elephants roamed over Trafalgar Square.

Some of the bones are now on display in the Natural History Museum.

What is Trafalgar Square named after?

The square is named after the Battle of Trafalgar, a British naval victory in the Napoleonic Wars with France and Spain that took place on 21 October 1805 off the coast of Cape Trafalgar, southwest Spain,

Yes, it’s a big traffic-free square, perfect for kids to run around blowing off some steam before heading back to the busy streets of London.

How accurate is the Lego version of Trafalgar Square?

It’s fairly accurate when it comes to the main structures in and around the square, but the proportions are not that realistic. As an example, the National Gallery is compressed compared to the real building which is much wider.

Why is the Christmas Tree on Trafalgar Square so ugly?

The Christmas tree is a wild growing spruce chopped down in the Norwegian woods, and not a purpose-grown tree to look nice for Christmas. As such, the tree has a much more rustic feel than the typical manicured-looking shop-bought trees which are grown on farms.

How to Stay Active With Kids During Lockdown

Camden Market: Don’t Miss Out on These Highlights