The Olympic Park Playground was designed by the same landscape architect as New York’s famous High Line. And we really like how the area is planned out, giving parents a good overview of all the play areas which makes it a lot easier to let children explore on their own.

The Olympic Park is huge, so make sure to set enough time. We usually try to combine it with a visit to Westfield Shopping Centre where we also pick up our lunch to avoid the overpriced and limited selection in the cafe. It’s quite a walk from Stratford tube-station, so a pram or sling is recommended if you’re bringing a toddler.

We really enjoy the play areas which is a combination of water, sand and climbing frames. The water fountain is obviously weather dependent, and the sandpit is usually most popular with the youngest kids. The climbing walls have been made to challenge different age-groups, and there is enough space between them to avoid older kids running over toddlers and babies. There is a cluster of child-friendly activities in this area, and a visit to the playground can be easily combined with other activities. Why not test out the Olympic swimming pool in London Aquatics Centre just a stone throw away from the playground!

In many ways, this is the complete opposite of the fancy “Play Gardens” of west London such as Diana Memorial Garden, Magic Garden and Children’s Garden which are usually divided up by hedges and bushes. The scale of the Olympic Park Playground is of course much smaller, but it’s refreshing to see a playground where all the play elements are so much in the open.

In the same area, you can find the Tumbling Bay Playground, as well as London’s most famous slide, “The Orbit”. Note that the minimum age for the Orbit slide is 8 years old, and children tickets start at £10.50 if bought online in advance. 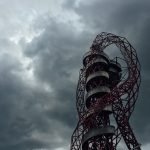 The Olympic Park Playground features all the essential play elements, such as big slides, several types of climbing frames, a big sandpit as well as a splashing fountain.