Central London is the beating heart of the UK capital, with world-famous attractions on every street corner. The hectic centre of the city can also be draining for families with kids in tow, and we recommend doing some research in advance to find child-friendly places. Check out our reviews of activities for kids in Central London while planning your day out in London! 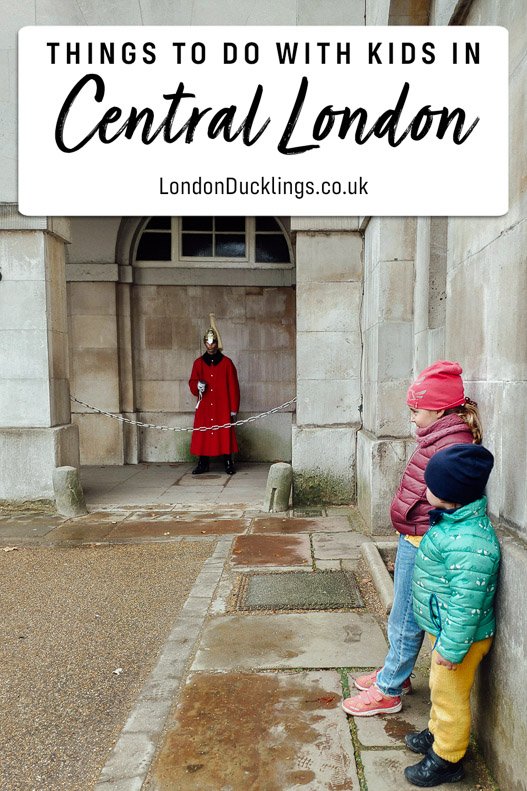 Things to do with kids in Central London

Many families visiting London for the first time keep to the most central part of London to cover the main attractions. And there is nothing wrong with that! Who wouldn’t want to see Buckingham Palace, the Tower of London and the Houses of Parliament? Keep in mind that all the big museums in Central London are free of charge (donation suggested), and attracts millions of people every year.

We highly recommend planning what you want to see in advance while avoiding the busiest times of the day if you are going with small children. As an example, the British Museum is so enormous that it’s just impossible to cover everything in a day, even for the biggest museum buffs. Look for our tips when it comes to the most child-friendly exhibitions for each museum.

Changing of the Guard

For first time families visiting London, Changing of the Guard is something that you don’t want to miss. The crowds can get quite huge, so you would want to be there early enough for a good view. On the other hand, you don’t want to arrive too early risking the kids to get fed up before the show even starting.

When tagging our posts with “Central London”, we have mainly included the districts of Westminster and the City of London as the two core historical areas of the capital. Here are the most popular areas within Central London:

The symbolic heart of London, Westminster is worldwide renowned for all its historical attractions. Classic activities for kids in this area include Changing of the Guard at Buckingham Palace, House of Parliament and Big Ben, St James Park Playground, Tate Britain and Westminster Abbey.

Located in Soho are the majority of London’s theatres as well as Chinatown, the gay quarter and the red light district. There are also plenty of colourful markets and specialist bookshops. Attractions in this area include the British Library, British Museum, Carnby Street and Liberty

A very lively part of the capital packed with buskers, street entertainers with plenty of places to enjoy a meal or a snack and a whole host of quirky little shops to explore. Attractions in this area include the London Transport Museum, National Gallery, National Portrait Gallery, Royal Opera House and Trafalgar Square.

Known as the square mile, the global finical centre of London, a very busy area Monday to Friday but as hardly anybody lives there it’s very quiet at weekends. Attractions in this area include Bank of England Museum, Museum of London, St Paul’s Cathedral and the Tower of London.

Berwick Street Market is a well-established trading location in the heart of Soho. There has been a market here since the 1700s, but it was formally …

Cabbages and Frocks Market is a Local London Gem

Plan a Family Cycling Trip along the Thames Path

London Transport Museum – A Paradise for Kids into Vehicles and Machinery