The Thames Path cycle route from Tower Bridge to North Greenwich is one of our favourite family rides in South East London. It’s mostly traffic-free and safe for children with plenty of attractions to enjoy on the way, like Cutty Sark and Surrey Docks Farm.

Even if London has become a safer place to cycle in recent years with more and more cycle highways, it’s still hard to avoid busy roads and complex junctions. That’s why it’s great to have the Thames path where you are shielded from traffic most of the way. If you cycle east from Tower Bridge on the south bank of the river, you’ll have around 17 miles of traffic-free cycling on the Thames Path until you reach Erith in South East London on the border to Kent.

Worried about cycling in the city with children? Check our list of safety tips for families!

Here’s a brief description of the Thames Path cycling route to North Greenwich from Central London:

Starting out from Tower Bridge

This is the most scenic part of the route, with great views of Tower Bridge with London’s skyline in the background. The first part is taking you along historical warehouses in the area of Shad Thames where ships used to load and unload their cargo in Victorian times. The area still feels very authentic with cobblestone streets and well kept original buildings crisscrossed by overhead goods gantries. On some of the buildings, you can still see the signs of what they used to store, such as the cardamon building.

Continuing towards Bermondsey and Rotherhithe

Moving on towards Bermondsey leaving busy London behind, you will get surprised how all of a sudden everything becomes a lot calmer. From here on until Greenwich, you’ll pass mostly residential areas but with several interesting attractions along the way.

After a short ride, you will pass the Brunel Museum and the Mayflower pub. The Brunel Museum is more of a small exhibition, but the underground hall is really impressive. This is where the Thames Tunnel opened in 1843 and is the birthplace of the world’s first underground metro system. The Mayflower pub, named after the famous ship arriving in New England is popular and atmospheric. It’s usually really hard to get a table.

The next best opportunity for a pitstop along the Thames is the Salt Quays. This is one of the few places to have a meal with a view of the Thames on this stretch. Here you have a lot more space than the Mayflower, and much better chances to find a table. For the best food, we would probably wait until you get to Surrey Docks farm where you’ll also find The Ship and Whale. Surrey Docks Farm is a really nice community farm recently upgraded and is definitely worth a stop with young kids in tow.

Through Deptford towards Greenwich

With panoramic views of Canary Wharf on the other side of the Thames, you’ll be able to cycle on the riverside all the way until you reach Pepy’s Park just after passing the high rise building Aragon Tower. From this point, you’ll take several quiet side streets through Deptford until you reach the outskirts of Greenwich. The reason why you can’t travel along the river is the derelict area called the Convoy’s Wharf, which is gated off while being developed into a huge new residential area.

Greenwich is a jewel on the Thames Path, with so many historical museums and buildings to enjoy. Some of our favourites include:

Families with children will enjoy the interactive galleries at Cutty Sark and National Martitime Museum and you’ll find delicious street food options at Greenwich Market. Greenwich Park is not far away to enjoy a picnic.

Cycling though the Old Naval Academy, your’ll pass through a few quiet side streets again until back at the Thames path with several new developments along the riverside. Beyond this the path then enters an industrial area of old school industry and derelict sites. Arriving in North Greenwich you’ll be able to cycle riverside all the way around the O2 area towards the pier where you can hop on a Thames Clipper and get back to Central London with your bike.

Back to Cycling in London Main Page

Is cycling on the bank of the river Thames allowed?

The Thames Path is considered primarily a footpath although certain sections are open to other means of access including horse-riding and cycling. Along the length of the Thames, signposts indicate the types of access allowed. Priority and right of way are always given to people on foot, but certain sections, especially in lower sections of the Thames near Central London are open to Cyclists, whilst in some country sections, horse riding is permitted where space and conditions allow.

In certain places, the lay of the land either helps or impedes the cyclist. Stiles, gates and other man-made or natural obstacles can get in the way meaning continuous mounting and dismounting. Added to this that in the upper and middle sections, much of the Path outside of towns and villages is not paved or gravelled makes for tough going some times, especially after heavy rain or flooding.

Are there cycle lanes on the Thames Path?

Is the Thames Path cycle route marked with signs? 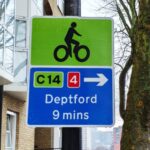 Why is the cycle route signage in London such a mess?

Several cycle path development projects under different London majors have resulted in paths having different standards. Which is why you find different names like Cycle Superhighways, Quietways and Cycleways in addition to the National Cycle Network.

Which part of the Thames Path is best for cycling?

If you want to cycle on the bank of River Thames, going east from Tower Bridge following National Cycle Network nr. 4 towards Erith in South East London is a good option. Most of the 17 miles long cycle route is traffic-free on shared footpaths.

Can you walk along the Thames foreshore in London?

At low tide you can walk on the Thames foreshore, but make sure to plan enough time to get back up again as the tide rises quickly.

What are the best things about taking the Thames Path through London?

As a London family frequently using the Thames Path, we really appreciate the fact that it’s mostly traffic-free, the air is cleaner and as a bonus, you get a fantastic panorama of the city.

Coram’s Fields – A Sanctuary for Children since...

Excellent Scooting Routes with Kids in...