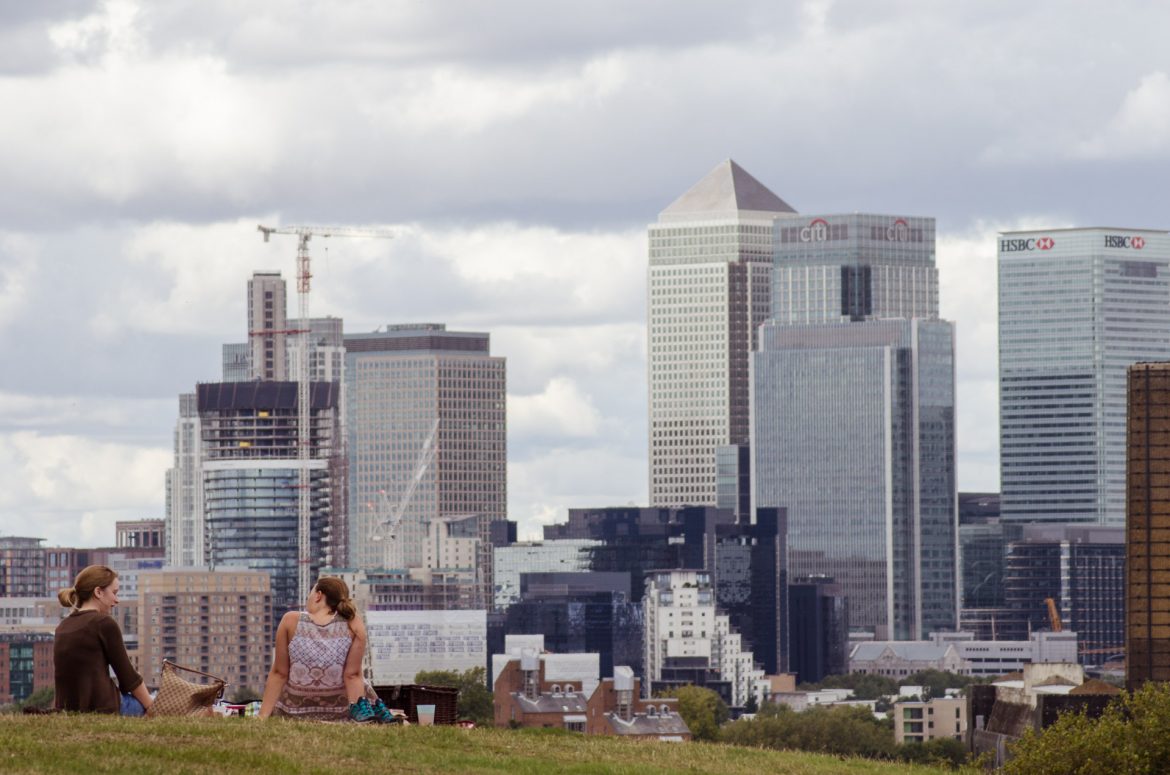 Greenwich Park: Where else in the world can you sit in the ‘back garden’ of a King’s palace. With a foot in each hemisphere, setting your watch to world time while looking across the major sights of London and the River Thames.

There are lots of amazing parks in London, but Greenwich is our favourite. Why? Because of the amazingly beautiful views. Not because the viewpoints are so high or because you’ll see every famous high rise building on London’s skyline – for this you can go to the Shard, or even better get a free ticket to the Sky Garden.

So to make it easy for you, we mapped out four different locations where you can enjoy some of the most beautiful views of London.

This is the most popular viewpoint in Greenwich Park which often gets busy during holidays and weekends. From here you can look down on the Queen’s House, the National Maritime Museum, the Royal Naval College and the high-rise buildings of Isle of Dogs on the other side of the river. The Queens House is said to be the model used for the White House in Washington DC.

Like other Royal Parks in London, Greenwich Park was once the hunting park for Henry VIII, and it was the first Royal Park to be enclosed in 1433.

In addition to the views towards the north side of the park and Isle of dogs, you’ll get a nice glimpse of Our Ladye Star of the Sea Church and the south of the city westwards.

From Maze Hill you get great views towards Isle of Dogs and the Thames running east towards North Greenwich and the O2 arena.

Its 180 acres offer excellent views of the City of London, the Isle of Dogs, and the Thames. The park was opened to the public by George IV in 1830 and has been a popular destination for Londoners ever since.

Roman ruins were discovered during routine park operation in 1902 and have been partially excavated over the years. Archaeologists have been able to determine that the structure was most likely a temple, and it appears to have been part of perhaps an extensive temple complex. These days, some 2000 years since the time of the Romans, this park is the perfect place to spend a day enjoying the outdoors.

One recent project at the park is the restoration of an old orchard area dating back to about 1666, and the Royal Parks and volunteers are working hard to preserve some of the original features while making it an ecological asset to the community. The Deer Park at Greenwich, also known as the Wilderness, is the oldest of London’s deer parks and is home to a small herd of red and fallow deer.

The beauty of Greenwich is that there are so much to explore. You can make a great day trip and combine a visit to a museum with a visit to the park while enjoying delicious street food from the local market. Here are the other Greenwich attractions that we’ve reviewed:

Cutty Sark – All on Board The Tea Clipper

Tate Modern: Is It Really Family-Friendly?