3 Fun Areas for Kids on board Cutty Sark

More of an experience than a museum, Cutty Sark in Greenwich just outside Central London is very much a hands-on living memory of the golden age of British maritime history. If you’re aiming to get your kids engaged in history, it doesn’t get more exciting than this!

Although this article may contain affiliate links, please note that this review is fully objective and not sponsored in any way (we paid for the entrance ourselves, and did not receive any compensation from the attraction).

Here are the three main areas you shouldn’t miss out on when visiting Cutty Sark with kids:

It’s out on the main deck you can get a real sense of the ship, and our kids had a blast running around exploring every corner.

Pretending to climb the ropes, going on the plank, visiting the master’s cabin and trying out the ship’s wheel – it’s a perfect place for pretend play. And there’s the great views of the Thames, Isle of Dogs and Canary Wharf.

2. Explore the cargo hull of the ship – the ‘tween deck

Cutty Sark is a delight for older kids as well as preschoolers to explore. Pretty much everything is hands-on, so you don’t need to worry about telling your kids off constantly. Within the hull of the ship (the ‘tween deck), you’ll find a number of interactive exhibitions which will keep the kids busy while they hopefully get the gist of the role that the ship played in the global trade.

3. Play below the hull of the ship

Last but not least it’s the dry dock under the hull of the ship where you’ll be able to see the whole structure of the ship floating above you. And just like the Jolly Roger pirate ship in the Peter Pan adventure, it’s actually floating – although just 11 feet in the air :-) Cutty Sark is a world-class attraction well-tailored to kids that should be on the shortlist for all families visiting London! 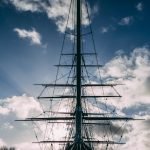 Visiting Cutty Sark is a great way to learn more about Britain's maritime history. Getting on board a sailing ship like this is an engaging experience for kids compared to a standard museum with static displays. We love the fact that it's safe for kids to explore many decks on their own, with displays and exhibitions targeted towards all ages.

You might not have time to do all of this in one single day, so prioritise your favourites first.

We think of London as a well-connected city today with daily flights to almost every corner of the world. But London was pretty well linked up with the rest of the world back in the Victorian age as well. Cutty Sark was initially built for the China tea trade, bringing tea to London from Shanghai and Hong Kong.

Later the ship served the Australian wool trade transporting more than 45,000 bales to England’s textile factories during the industrial revolution. Cutty Sark took around 80 days to complete the voyage from Australia to London which might seem long, but it was the fastest ship in its day.

A brief history of the tea clippers

By 1834, the East India Company no longer had a trading monopoly, and tea became an item that was traded freely across the globe. The Company was no longer in need of its huge vessels and decided to sell them off, and many were purchased by captains of merchants or traders who continued to sail the oceans across Britain and China conducting tea trade. Now tea was able to be traded in many different forms; the sailors started to realize that whoever carried the tea from a new harvest back to Britain first was the one who would make the most money.

This was partly due to practicalities – if first to market you could sell your tea before the competition even got there. And because consumers in the 19th period believed the better and the earlier the tea was picked, the more delicious the beverage would be. In addition, the old ships’ lumbering appearance was less attractive, and tea merchants started to look for faster, more sleek ships to carry their treasured cargo back. But this idea was adopted slowly. And while the 1840s saw a few more speedy ships being launched, most merchants were content with the slow but reliable East Indians ships.

It was the Americans who first invented clipper vessels. Based on an earlier form of a vessel called the Baltimore clipper, they were swift and slim and had a streamlined vessel that was more slender towards the back than the front and acres of sails mounted on tall masts. Some of them had six sails per mast and 35 sails. Their name was earned by their method to ‘clip off the miles.

The first tea clipper was called Rainbow, designed by John W. Griffiths and launched in 1845. It travelled between New York to Canton in 102 days, two weeks less than the previous record set for that journey. Their progress was further boosted after discovering precious metals and gold in California in 1848 and the discovery of gold in Australia in 1851. Those eager to find their fortunes were looking for ships to take them to their destinations as quickly as they could.

Before 1849, the clippers’ usage in the tea trade was mostly limited to America. However 1849, the British Navigation Laws were repealed, and, as a result, American ships could transport teas from China towards Britain in the first instance. The first vessel to profit from the new law was Oriental, spotted at West India Dock in London on December 3rd, 1850 – just 97 days after leaving Hong Kong. British merchants were shocked to learn that it was three times faster than the old East Indian ships. As a result, they decided to construct their own clippers to compete with the Americans and the first British tea cutter, Stornaway, was built-in 1850 was constructed in Aberdeen in 1850.

The tea clippers were further developed and constructed in Britain during the 1850s and the 1850s. They featured shorter beams than their American counterparts, making them less powerful amid serious conditions but quicker in light winds. There was a strong spirit of competition between British and American vessels involved in the tea trade; however, the Americans were well ahead.

In 1851, British ship’s proprietor Richard Green announced that he was tired of being informed of the bleak future for British shipping following abolishing the Navigation Laws and built the clipper Challenger to beat the American records. After leaving Canton to head for London in 1852 it competed with the American clipper Challenge. Bets of huge sums were placed on which ship would make it to London first and in the end, the British challenger Challenger was able to beat the Challenge getting to docks two days earlier than the American ship.

Exploring the area around Greenwich

The best thing about Greenwich is that you have so many different activities within a fairly compact area. In close proximity to Cutty Sark, you have several attractions like Street Food Market, National Maritime Museum and Old Royal Naval College (University today). In the park nearby, you’ll find a brilliant recently refurbished playground and on the top of the hill is the historic Royal Observatory. Note that if you’re planning to visit both Cutty Sark and the Royal Observatory you should buy a day ticket which saves you 20% on the ticket price.

What’s so special about Cutty Sark?

It was one of the fastest cargo ships back in it’s day, but it’s also a surviving symbol of the British Empire and it’s mercantile power.

Yes, Cutty Sark is all about hands-on experiences for kids and is suitable for toddlers as well as school-age children.

What’s the best way to travel to see Cutty Sark?

Hop on one of the Thames Clipper catamarans going eastwards from Central London, and you’ll arrive at Greenwich Pier right next to Cutty Sark. Alternatively go by tube and DLR to Cutty Sark station.

Is Cutty Sark far outside of London?

Cutty Sark is located in Greenwich, which is a borough in Greater London.

Can I use a pram/stroller visiting Cutty Sark?

Yes, you can reach all the decks of the ship using a lift.

Yes, the attraction has been described as incredibly accessible despite all the different decks and intricate spaces.

Is there a cafe at Cutty Sark?

Yes, you’ll be able to enjoy the Cutty Sark Cafe located below the copper hull of the ship.

Are there any good lunch options close to Cutty Sark?

There are several pubs and restaurants right next to the ship, and you also have Greenwich Market serving great street food not far away.

What else than Cutty Sark is great for kids in Greenwich?

The National Maritime Museum with several family-friendly galleries is a short walking distance away.

Is there a playground close to Cutty Sark?

Greenwich Park’s excellent playground is just a 10 minutes walk from the ship.

London Eye with Kids- a Review

5 Brilliant Areas for Kids at...

Vikings in London: Discover the real...