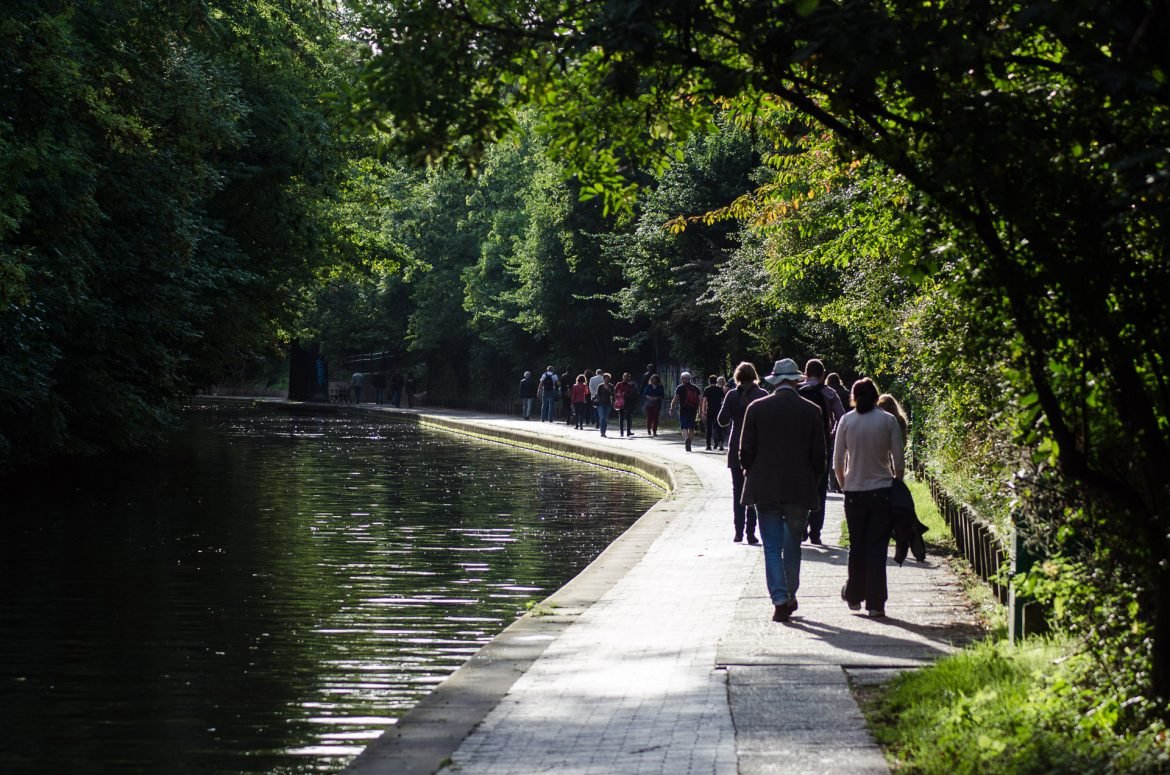 The scent and sight of ice, coal, leather and cheese – some of the cargo once carried along Regent’s Canal – has long disappeared. Now the water’s only passengers include Amelia Jean and Pembroke, century-old narrow boats moored at the towpath’s edges, and waterbuses by the name of Jason and Jenny Wren.

A few times a day, between Camden Lock and Little Venice, the waterbuses chug along, churning these murky, historic waters. They sail slowly. The tourists on board like to sit at the edge of the seats, level with the water, and take pictures of everything they see along the way.

What they will see, indefinitely, depends only on where the waterbus rider begins their tour. During high season, three operators – Jason’s Trip, London Waterbus Company, and Jenny Wren (sister to My Fair Lady, which runs meal cruises along Regent’s Canal on Sundays) – make several trips which both begin and end at Camden Lock and Little Venice.

Launching at Camden Lock under the arched brick bridge, the narrowboat heads west with the fading sounds of the market behind. Riders crane their necks to the right for a better view of Feng Sheng, a floating Chinese restaurant moored at the canal, grand in all its red and gilded gold.

Canal-dwellers water their potted flowers, or duck into their boats to get another mug of tea. They wash their circular windows on floppy scaffolding, they talk to their neighbours, one foot on the towpath, one on the narrowboat.

The guide announces the waterbus is approaching the edge of Regent’s Park and The London Zoo, where some of the tour operators will stop to pick up and drop off passengers. Zoo animals and birds in the frenzy of midday squawk and shrill while children point and giggle.

The park and the canal were both named after Prince Regent, later King George IV, who was on amicable terms with the architect behind both, John Nash. He was one of the directors of the Regent’s Canal company who endeavoured to link the Grand Junction Canal’s arm at Paddington with the River Thames at Limehouse.

The construction of Regent’s Canal

The idea was originally proposed by Thomas Homer in 1802. Work began in 1812, but Homer’s embezzlement of funds and a faulty lock design stalled construction. Eight years later, on Aug. 1, 1980, the entire Regent’s Canal officially opened at a total cost of £772,000, double the original estimate. In the first year, 120,000 tons of cargo were carried along the canal. Over the decades, its waters thrived and slowed and thrived and slowed again. By the 1960s, commercial use of Regent’s Canal all but ended, and the towpaths along the banks were eventually opened to the public.

Aside from afternoon strollers, cyclists, dogs, and pigeons on the towpaths, waterbus riders see the white, well-tended estates owned by some of London’s wealthiest. At the edge of those lawns are the addresses of dozens of boat owners who also call the canal home. Forty minutes into the ride, Maida Vale’s Little Venice is just around the corner.

A taste of Italy at Little Venice in London

Within London’s Maida Vale district is about a square mile known as Little Venice, which as its name suggests, is interspersed with waterways. The name is believed to have been coined by the English poet Robert Browning who lived here from 1862 to 1887. In turn, the lake-like junction of its canals was named after him. Browning’s Pool is home to a tiny island where ducks rest and trees stand.

The area was once home to artists, writers, and others who lived along the fringes of society, but today it consists of about ten tree-lined streets and a more genteel population. The area is full of 17th-century stucco homes, shops on Formosa Street, and Clifton Gardens. Little Venice is also known for the Canal Cafe Theatre, the Puppet Theatre Barge, the Cascade Floating Art Gallery, the Waterside Café and the Warwick Castle pub.

At the bow of the Little Venice Cafe and Information Centre, a red narrow boat moored at the towpath, passengers can call their journey to an end, or take in the Pool before sliding back into the canal.

The London Waterbus Company runs traditional narrowboat tours which pick up and drop off passengers at Camden Lock, the London Zoo and Little Venice as part of one-way or return trips. Winter (Nov. to March 2010) runs are available at the weekends (except Dec. 26, 27 and Jan. 2, 3) between 11 a.m. and 4 p.m. High season sees boats departing daily.

Bookings are not necessary, but for more information, call 020 7482 2550 or visit www.londonwaterbus.com. Located at 58 West Yard, Camden Lock Market.

Jenny Wren runs traditional narrowboat tours which last 1.5 hours and are return trips from Camden Lock. Sailings are two to four times daily between March and October. The My Fair Lady cruising restaurant is a 2.5-hour journey which departs at 1 p.m. for lunch and 8 p.m. for dinner. To check cruise availability, location, or for more information about the timetable, call 020 7485 4433 or visit www.walkersquay.com. Located at 250 Camden High Street.

Jason’s Trip: The original Regent’s Canal cruise on a narrowboat named Jason, one of the oldest narrowboats in the world at nearly 100 years old. Jason’s is now closed for the winter but will reopen in spring, with four departure/arrival times daily at Camden Lock and Little Venice. For more information, call 020 7286 3428 or visit www.jasons.co.uk. Located at Jason’s Wharf, opposite 60 Bloomfield Road.

Alexandra Palace Playground Reviewed – Is It Any...

Camden Market in London – Get Your Goth...