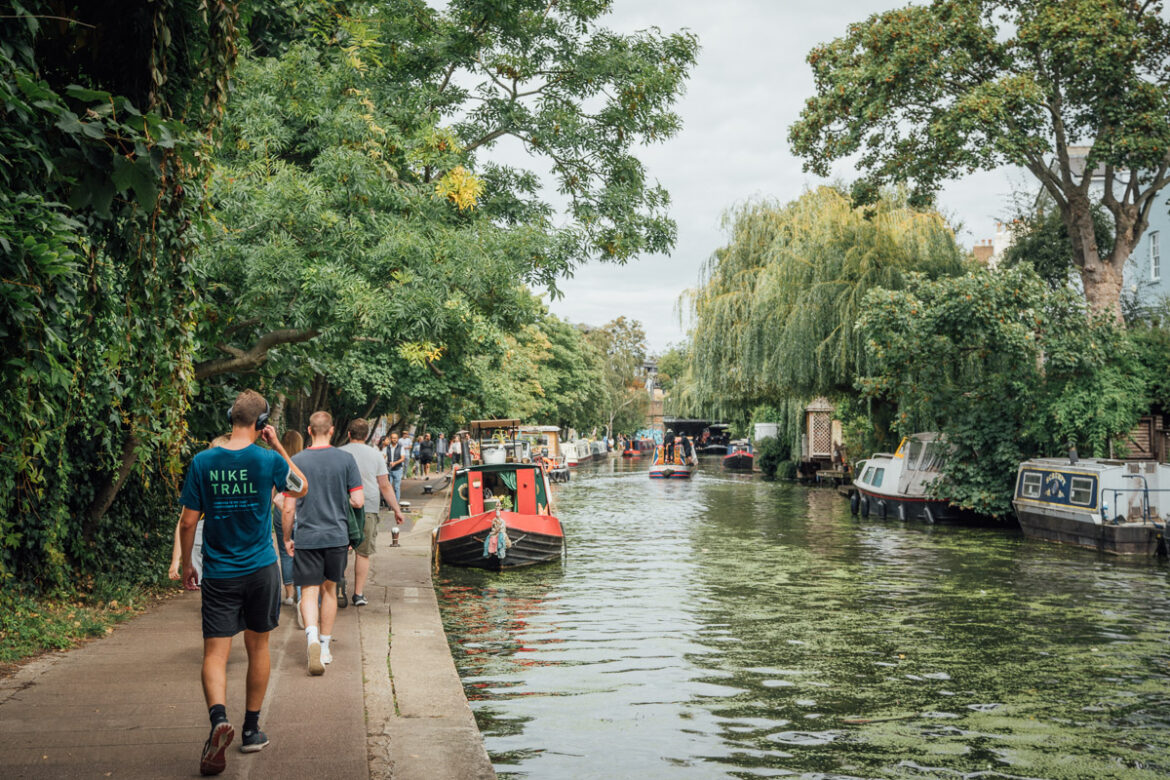 Take the Regent’s Canal Walk from Little Venice to Camden Lock and experience some of London’s hidden gems. As previous residents of Maida Vale, let us take you on a journey covering some of the splendid highlights to be seen along the towpath.

Our selection of wonderful things to see when taking the canal walk on the towpath from Little Venice to Camden Lock (jump to section):

The first section of Regent’s Canal was finished in 1816 between Little Venice and Camden, connecting the central part of North London with the Grand Junction Canal. The canal was used to transport goods like timber, coal, building materials and food in and out of London until the 1960s.

Luckily the canal still feels very much alive with the waterways used by private narrowboats and pleasure crafts. At the same time, the former towpaths are popular as traffic-free alternatives for cyclists, joggers and walkers.

The scent and sight of ice, coal, leather and cheese – some of the cargo once carried along Regent’s Canal – has long disappeared. Now the water’s only passengers include Amelia Jean and Pembroke, century-old narrow boats moored at the towpath’s edges, and waterbuses by the name of Jason and Jenny Wren.

Within London’s Maida Vale district is about a square mile known as Little Venice, which, as its name suggests, is interspersed with waterways. The name is believed to have been coined by the English poet Robert Browning who lived here from 1862 to 1887. In turn, the lake-like junction of its canals was named after him. Browning’s Pool is home to a tiny island where ducks rest and trees stand.

The area was once home to artists, writers, and others who lived along the fringes of society. Still, today it consists of about ten tree-lined streets and a more sophisticated population. The area is full of 17th-century stucco homes, shops on Formosa Street, and Clifton Gardens. Little Venice is also known for the Canal Cafe Theatre, the Puppet Theatre Barge, the Cascade Floating Art Gallery, the Waterside Café and the Warwick Castle pub.

Enjoy a unique lunch on board a real canal boat in Little Venice. Expect hearty homemade food such as soups, burgers and pizzas. The barge might move a little, but there’s no risk of getting seasick.

You’ll find the Puppet Theatre Barge moored in the Little Venice basin from October to July, with regular performances on Saturday and Sunday. Beautifully located among other canal boats overlooked by Regency houses, the floating theatre has been anchored here since 1982.

There are 55 seats onboard the theatre, and you’ll be able to enjoy unique and magical performances such as Brer Rabbit Visits Africa and The Flight of Babuscha Baboon. The shows normally last for just over an hour, sometimes with an interval of around ten minutes halfway through for refreshments. Book in advance by going to their website puppetbarge.com

When the theatre is not in Little Venice you can find it in Richmond-upon-Thames.

Cafe Laville is located right on top of Maida Hill Tunnel in Maida Value, overlooking Regent’s Canal and Little Venice. Just like in real Venice, you can enjoy a nice selection of Italian dishes while sitting on the terrace watching the sunset go down.

The Maida Hill Canal Tunnel in London was finalized in 1816 as part of the opening of Regent’s Canal connecting Camden to the Paddington branch of Union Canal. Unfortunately, there’s no towpath in the tunnel, so before the barges were motorized, the boats had to be manually pushed (or legged) through sheer manpower.

It only takes a couple of minutes to cruise through the tunnel if you go by boat, but since there’s no towpath to walk on, everyone else needs to walk above the tunnel before returning to the canal path further east. Check our map further down if you need help to find your way.

Maida Hill Tunnel is also an example of Victorian recycling… the material excavated from the tunnel was given to Mr Lord. He laid it on his field, which later became Lord’s Cricket Ground located nearby.

Historically Lisson Grove Moorings was used for unloading barges to the local electricity plant. Now it’s a charming community of people living permanently on the colourful narrowboats along the towpath side. There are beautiful flowers and plants all along the mooring, and it feels really special to get a glimpse into how the boat people live. There are not many true “hidden gems” in London, but this is actually one of the few ones left.

The contrast is big walking past Lisson Grove Moorings towards Regent’s Park, seeing the enormous townhouses lining the canal side on the right-hand side. The first of these mansions you’ll see is Hanover Lodge which Russian billionaire Andrey Goncharenko acquired in 2012. Members of the nobility originally built townhouses like this as city residences they would move to during the social season when balls and other gatherings occurred. You’ll get a really good view of seven of these impressive mansions before arriving at the London Zoo part of the walk.

Macclesfield Bridge is the next landmark, known as Blow-up-Bridge, after a disaster in 1874 when a narrowboat called The Tilbury carrying coffee, nuts and gunpowder exploded. All three men about the Tilbury died, with windows being shattered as far as a mile away. When the bridge was re-assembled, the supporting columns were reversed. This is why you can see horse pulling rope marks on both sides of the columns, and a tree still shows damage from the explosion.

London Zoo stretches out on both sides of the Regent’s Canal, connected by bridges above the waterway. You might get a glimpse of a few of the animals if you pay close attention. Locals have long known a few tricks to see some of the inhabitants for free, most notably exotic ducks and ibises squawking in the Snowdon Aviary on the north side of the canal. And on the south side of the canal, you might see the energetic African hunting dogs pacing up and down.

London Zoo opened in 1828 and is the oldest scientific zoo in the world. It remains one of London’s top attractions for children to this day and is well worth a visit.

Where the Regent’s Canal turns left towards Camden you’ll notice a curious-looking exotic structure floating on the water. That’s the Feng Shang Princess, grand in all its red and gilded gold.

The Chinese restaurant floating in Cumberland Basin is like a magic ship taken out of Peter Pan. If having crispy duck under moody red lanterns is your thing, this could be a nice (but expensive) pitstop. We recommend continuing your journey towards Camden Lock’s tasty street food market if you’re on a budget.

You can feel the buzzing vibe from Camden long before you reach your destination. When you approach Camden Lock Market you’ll notice people relaxing along the towpath enjoying their street food and drinks.

Camden Town consists of several markets, but Camden Lock is the original one, regularly used since 1975. The international street food market is located around the canal lock, where you’ll find everything from Peruvian arepas and Taiwanese fried chicken to Dutch pancakes and Greek Souvlaki.

The Construction of Regent’s Canal

The park and the canal were named after Prince Regent, later King George IV, who was on amicable terms with the architect behind John Nash. He was one of the Regent’s Canal company directors who endeavoured to link the Grand Junction Canal’s arm at Paddington with the River Thames at Limehouse.

Thomas Homer originally proposed the idea in 1802. Work began in 1812, but Homer’s embezzlement of funds and a faulty lock design stalled construction. Eight years later, in 1820 the entire Regent’s Canal officially opened at a total cost of £772,000, double the original estimate. In the first year, 120,000 tons of cargo were carried along the canal. Over the decades, its waters thrived and slowed and thrived and slowed again. By the 1960s, commercial use of Regent’s Canal all but ended, and the towpaths along the banks were eventually opened to the public.

The London Waterbus Company runs traditional narrowboat tours, which pick up passengers at Camden Lock, the London Zoo and Little Venice as part of one-way or return trips. Winter (Nov. to March 2010) runs are available at the weekends (except Dec. 26, 27 and Jan. 2, 3) between 11 a.m. and 4 p.m. The high season sees boats departing daily.

Bookings are not necessary, but for more information, call 020 7482 2550 or visit www.londonwaterbus.com. Located at 58 West Yard, Camden Lock Market.

Jenny Wren runs traditional narrowboat tours, which last 1.5 hours and are return trips from Camden Lock. Sailings are two to four times daily between March and October. The My Fair Lady cruising restaurant is a 2.5-hour journey that departs at 1 p.m. for lunch and 8 p.m. for dinner.

Jason’s Trip: The original Regent’s Canal cruise on a narrowboat named Jason, one of the oldest narrowboats in the world at nearly 100 years old. Jason’s is now closed for the winter but will reopen in spring, with four departure/arrival times daily at Camden Lock and Little Venice. For more information, call 020 7286 3428 or visit www.jasons.co.uk. Located at Jason’s Wharf, opposite 60 Bloomfield Road.

It’s a path that runs parallel to a canal or waterway. Before the canal boats were mechanized, the towpaths were used by men and horses to manually pull the narrowboats up or down the canals. Today the towpaths are popular for recreational use, such as walking, scooting and cycling.

How long does it take to walk the Regent’s Canal From Little Venice to Camden?

It takes around one hour walking at normal speed.

Yes, there are several step-free access points to Regents’ Canal.

Is Regent’s Canal connected to the Thames?

Yes. Regent’s Canal is connected to the Thames through the Limehouse Basin in East London.

Can I travel by boat on Regent’s Canal?

Camden Market: Don’t Miss Out on These Highlights