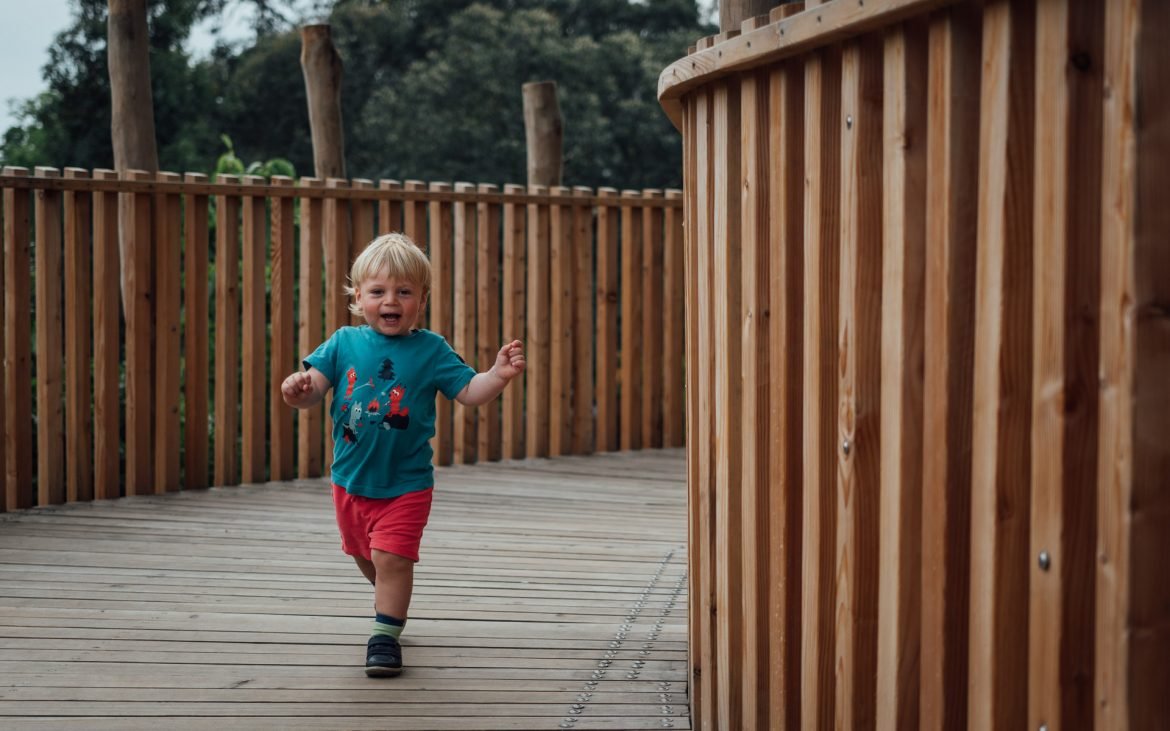 Kew Gardens Playground is officially called Children’s Garden. This doesn’t mean it lacks the usual bells and whistles of a playground; you’ll find trampolines, slides, splash pool, climbing structures, water pumps and sandpits. Think of it as an adventure playground that has been really well planned out and integrated into the natural elements of the garden.

The key elements of life in Kew Garden Playground

The Kew Gardens playground (aka Children’s Garden) has thoughtfully been divided into the key elements of life and nature, namely:

The play areas are matched with each theme, so in the Air Garden you can jump on trampolines and climb up in the treetops, in the Water Garden the kids can play with water pumps and enjoy the splash pool and so on. We think this is clever and really useful for children of school age to get a better understanding of the basic elements of nature. Younger kids will have a hard time getting these concepts and it will be all about the fun. On the other hand, they get to enjoy the sensing of a really wide range of elements.

Overall the kids really enjoyed the Kew Gardens Playgrounds. The facilities and play elements are top-notch, they felt safe and are well kept as you would expect considering the recent refurbishment. At the same time, a family ticket to Kew Gardens will cost you £40 for a family of four. Which means you should also be allowed to expect more than from one of the free playgrounds of London, like Diana Memorial Playground or Greenwich Park Playground.

As parents, these are the considerations we would make when visiting:

The two-hour window is really short

You don’t really know when your time-slot will be until you are at the gate. This makes it hard to plan your day, especially when it comes to younger children depending on their nap time as well as how to organise lunch. Worst case, you get to spend the majority of your two-hour time slot with a sleeping toddler and sitting in the shade somewhere having lunch. Our best advice is to plan your visit having a few alternatives plans for how to spend the day, depending on the availability of the time-slots. We chose a time-slot slightly later than what we were initially offered so we could sort out the lunch and nap-time beforehand. Which again lead to a couple of hours of relaxing in the sun next to the park and getting home a lot later than planned.

Younger and older children mixing up

The divisions of the play areas have been made based on the themes (earth, air, sun, water), and not so much based on the ability or age of children. From one point of view, this is really nice since families can stay together without splitting up. On the other side, we did experience our two-year-old being trampled over by older children quite a few times. This is not a deal-breaker as such, it just means you need to be prepared to keep an eye on your smallest ones at all times.

The garden is divided up in many elements

We appreciate the efforts to educate children around the four basic elements. At the same time, the many divisions of the park in different play-areas with different themes make it hard for parents to keep an eye on their children and let them play and explore on their own. This is in contrast to other nature-themed adventure playgrounds such as Peckham Rye Playground where the landscape is completely open. We are strong believers in children being able to explore and play on their own without parents interference.

Based on the quality of the play areas and facilities we would say Kew Gardens has one of London’s best playgrounds if not the best. Our kids truly enjoyed the day, which was our main goal with the visit. At the same time, we as parents felt more on edge than in any other playground we have been to. This due to the time-pressure of the two-hour window, risk of older kids tramping on our toddler and the limited view because of all the divisions into multiple separate gardens.

Kew Gardens Playground ("Children's Garden) has been refurbished and feature an impressive amount of play-areas and facilities hardly matched anywhere else in London.

Getting to Kew Gardens

Cool Things to do with Kids in Battersea...

Top Things to do With Kids at Kew...