Chill out in St James Playground in Central London

St James’s Park is perhaps the most prominent Royal park in London. This oldest of London’s parks is located right next to Buckingham Palace, the Queen’s residence in the capital. The St James playground occupies quite a small part of the park but is well planned out and well kept.

The excellent location makes the playground a welcome pit-stop for visitors with small children on their way to Buckingham Palace and Changing of the Guard. The park is well integrated with the rest of the park. It is also gated, which makes it easier to let the children run freely.

Which age group is most suitable for St James Park Playground?

St James playground is most suitable for toddlers as well as children up to around seven years of age. The sandpit with boulders and stone bridge is the key spot for toddlers. Older children can be challenged by a climbing wall which was just perfect for our five-year-old when we visited.

There are also plenty of benches for parents to sit in, and the cafe is not far away if you want to bring a coffee. The facilities are well maintained, and the different play elements feel safe.

Henry VIII acquired the land from Eton College in 1532 and later established St. James’s Palace before converting the land into his own personal deer-hunting and duck-shooting terrain. King James, I even added different exotic animals to the park in 1603, such as crocodiles and even an elephant and a camel, and planned for the park to be landscaped.

Thanks to Charles II the park’s original marsh was converted into a long narrow canal which can still be seen today. In the 17th century, Charles II remodelled the park (with the help of the famous French landscaper Andre Mollet) to make it resemble the gardens of Versailles in France. Charles II was also the first sovereign to enable St. James’s Park to be open to the public. He used the land to welcome both his guests and mistresses during his reign.

The biggest change of St. James’s Park happened in 1828 when architect John Nash remodelled the land with trees, lawns and gardens under the orders of George IV. Nash was accountable for converting the original canal into a “naturally-shaped” lake, and he also designed the park’s picturesque avenues and winding pathways. 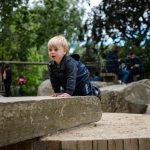 St James's Park Playground offers a nice break from the tourist trail, letting younger children lose to explore and play on their own before heading to the next attraction.

Explore the Best Things to do in East...