Southwark Park Playground is an excellent local play area in Rotherhithe with solid playground equipment for kids in different age-groups. Check how we reviewed the playground, and take a look at some of the other family-friendly attractions in the area.

Southwark Park can be reached from Canada Water or Bermondsey tube stations, as well as Surrey Quays Overground station. Traffic around Surrey Quays shopping centre is massive, and this is also one of our biggest negatives with Southwark Park. Accessing the park on foot coming from the shopping centre side, you need to cross four heavily congested roads around Surrey Quays station. Not only does it take a lot of time to cross, but its also a terrible way to start what’s supposed to be a healthy break in the park by breathing in a massive amount of harmful car exhaust.

The park itself is a popular hangout for locals, and much less crowded than other more famous parks in central London. The most recent addition to the park is the Southwark Park Pavilion Cafe that was opened in February 2020. The cafe and building is a welcome addition to the park and is really lifting the whole area to a new standard. Sitting right next to the lake, the architecture blends in well with the art gallery and the rest of the landscape.

To no surprise, the long winding slide is the most popular thing to do for our kids as well as for most other. The slide has been there for a long time, but they also added a few challenging elements to get to the top. You’ll have the typical mix of young and old children running on top of each other, but the layout makes it easy for parents to keep an eye.

The climbing spider structure is probably the most significant addition to the refurbished playground, giving slightly older children a good challenge.

The toddler section of the playground is completely fenced off from the rest, which makes it safe and easy for parents to let their little ones loose. All the equipment here feels well maintained and safe, representing just enough of a challenge for a 2-year-old to make it fun and engaging. 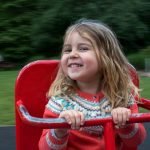 Southwark Park Playground is a local favourite, and even if it's not next door to us we often take the extra efforts to take the kids there. Hopefully, they'll find ways to make better footpaths to avoid pedestrians having to walk next to the heavy traffic to get into the park.

There are plenty of things to do around Rotherhithe, like Surrey Docks Farm, one of the best city farms that we have reviewed in London. Also on the Thames Path, the Brunel Museum is small but interesting. Not far across the other side of the Thames, you have Mudchute Park & Farm as well as Docklands Museum which are both very family-friendly options. Further south-east you have lots of exciting things to do around Greenwich, like the National Maritime Museum and Greenwich Park Playground.

Horseferry Playground next to the Palace of Westminster