Things We Liked About Newham City Farm (before it closed)

Unfortunately, Newham City Farm has closed permanently after almost 45 years. Newham Council’s cabinet agreed unanimously to the closure at a meeting on Tuesday, September 7 2021. A bid to persuade councillors to let supporters take over the running of the Beckton-based farm opened by Princess Anne in 1977 failed. Newham maintains the site will remain a green space that is accessible to the public.

Newham city farm is a perfect break for families with children passionate about farm animals. As one of several city farms in East London, the Newham version will greet you with all the essential farmyard animals like cows, sheep and horses.

One of the oldest city farms in London, Newham was opened in 1977. It’s a real community farm and a popular hangout for families during weekends. The farm is more extensive than the average London urban farm, but a bit smaller than Mudchute farm on Isle of Dogs. In addition to the bigger farm animals like cows and goats, you’ll also find some small fussy ones like rabbits and ferrets.

The farm is organising several activities available for both children and adults:

Hosted on Saturdays, this is an introduction to farming for the younger age group. In this way, kids could progress through to volunteering when reaching the 12 years old stage.

With this activity, children can build their confidence around horses and ponies. As part of the club, you will take part in some riding sessions, although it’s not a riding club per se.

This club is offering the whole family to take part in gardening. Great for all ages and abilities, activities include gardening, bug hunting, crafts and cooking. An adult must accompany children under eight years.

Volunteering at the farm

The farm operates an adult volunteer project for people with an interest in animals or ​community gardening to help out on the site and at events held throughout the year. There is also a young volunteer scheme for 12-17-year-olds over the weekends and some school holidays. Volunteers help out with several farm duties, including feeding animals, mucking out, sweeping the yard, collecting eggs, grooming animals and gardening duties.

Space to run around

In addition to visiting the animals, kids have plenty of space to run around. There is an indoor play barn, as well as a play area for toddlers next to the cafe. If you want an outdoor lunch, there are plenty of picnic benches. The cafe is located in the visitor centre in King George V park where you can also buy fresh produce, such as farm eggs and honey from its beehives, subject to availability.

The farm is a registered charity, dependent on funding by the borough as well as from private donations. There are several ways you can support the farm, such as signing up for a membership, sponsoring an animal or taking part in a corporate day out. 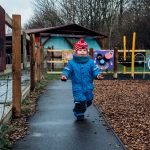 Newham City Farm is an authentic community farm in East London just next to London City Airport. It's much larger than the average inner-city farm, and parents can safely let kids explore on their own. The farm is right next to King George V's park so great to combine a farm-visit with a picnic. The farm is organising a lot of activities for children, so it makes sense to check their website in advance of the visit. We really like the indoor play that can be used to extend your visit or as a backup on a rainy day. Parking is also free, which is a great plus compared to many of the other farms located in East London.

Stratford is not far away, where you can test out the Olympic swimming-pool, enjoy the Pleasure Gardens Playground and go for a walk in Queen Elizabeth II’s park. The O2 arena is quite close as well, where you can try out free jumping at the Oxygen Trampoline Park.

Don’t forget to check the rest of the London City Farms we have rated, as well as our favourite playgrounds!

Places to see animals in london