The Magic Garden at Hampton Court is much more than just an ordinary playground. Opened by the Dutchess of Cambridge in 2016, the expectations towards were sky-high. Would this become one of London’s most spectacular places for children? Hear our experiences after a few visits.

Just like the Children’s Garden in Kew Gardens, the Magic Garden doesn’t want to be called a playground. We also appreciate that both places are so much more than just an ordinary playground. At the same time, we prefer to call a spade for a spade and will refer to it as a playground. At the end of the day, the play elements are what really matters for young children no matter how impressive the historical wrapping is. Children, at least the youngest ones don’t come to admire how the play areas have been integrated into the garden landscape.

Keeping an eye on your children

In terms of the landscape, we felt that the playground had been really well planned out. One of the key aspects often neglected by playground designers is the fact that parents need a good overview in order to let children play freely on their own. Especially if you are bringing small children, and children of different ages playing in different areas of the park. If the playground is too divided up and cluttered, parents need to be on constant alert to track down their offspring leading to a stressful day for everyone. In the Magic Garden, you have quite a good overview, especially around the centre of the park where older children can climb up the hill and toddlers can play in the sandpit.

Even if the playground is well planned out, you still face the danger of losing your child in the huge crowds during school holidays. Efforts have been made to reduce crowding by allocating a 2/3 hour slot and a wristband showing which group you belong to. However, it did feel like many overstayed their allotted time. The cafe area is also very crowded, with parents parking their prams and belongings everywhere making it hard to find a free table. This particular area of the playground felt really cluttered. It’s really surprising that not more efforts have been made to create space for families to sit down and have a break.

The most impressive structures entering the grounds are the two royal King and Queen towers. We had big expectations towards what they might contain, but besides enjoying the view from the top they felt quite empty. You can take a selfie with a nice background, but there is not much more to them.

Summarizing our review of the Magic Garden Playground

Looking at the big picture, the playground is a great addition to Hampton Court as an overall interesting adventure for children. We feel they have really succeeded in inspiring children, making the Tudors period come alive becoming a door opener to the rich British history. In this aspect, the playground and the palace really goes hand in hand.

When it comes to the play areas, our children had a blast climbing the aerial walkway as well as going up and down the mound. The sand-pit and water area next to the dragon were the most popular elements for our two-year-old. On the other hand, some of the other play elements like the royal towers looked really interesting from afar, but we felt they were gimmicky and empty up close. Trying to create a magic place for children is not an easy task, especially not with all the expectations towards creating a beautiful historical garden closely connected with Hampton Court Palace. In the end, we had terrific fun and would highly recommend going to the playground as part of a visit to the Palace. On the other hand, we would probably not have travelled from afar to experience the playground on its own. 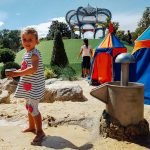 The playground at Hampton Court is a great addition to the Hampton Court experience for children. Considering the ticket price and the crowds, we feel there are other admission free playgrounds in London that offer a similar or better experience.