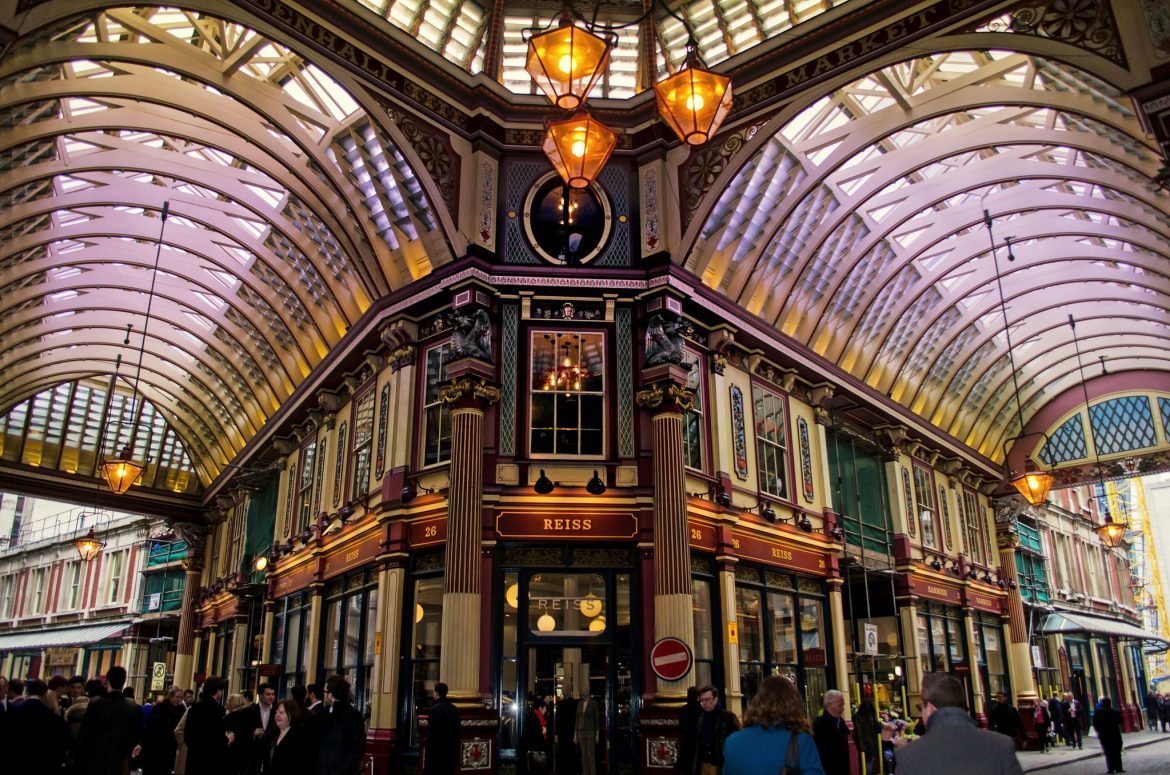 Leadenhall Market is a remarkable covered market on Gracechurch Street in London. Its name comes from the market established here in the 14th century around a manor home with a lead roof, but its roots go back much further. There was a forum on this site around 1 AD, and it was at the centre of Roman London.

Harry Potter and the Philosopher’s Stone

Diagon Alley is a vibrant shopping and restaurant area in the first Harry Potter film released in 2001. In one of the most memorable scenes from the film, Hagrid takes Harry Potter shopping for a wand after he has been introduced to his magical powers. Hagrid leads Harry through a secret passage to Diagon Alley which can be found by entering through the Leaky Cauldron at 42 Bull’s Head Passage in Leadenhall Market (which is now an opticians office). Harry Potter fan? See if you can take our Harry Potter London Quiz!

From its humble beginnings as a simple food supplier, Leadenhall Market has definitely gone upscale. The covered market houses many permanent shops, the majority of which sell to an upmarket clientele. There are stores selling fine clothing, jewellery, and accessories.

The market gets quite a lot of trade from the nearby city workers who often stop in at lunchtime for a meal, so there are also shops to accommodate their needs such as a photo shop, a locksmith and shoe repair shop and a hairdresser.

The market stalls feature mainly fresh foods such as meats, cheeses, and pasta. There are also stalls selling flowers, jewellery, and art. Leadenhall is also well known for its events such as the annual “Light Up Leadenhall” event, where the Lord Mayor of London arrives to turn on the Christmas lights and draw the winning ticket for a fabulous Christmas Hamper.

“Sax in the City” is another popular event at the market; it is a week-long celebration of jazz with lunchtime performances and a fantastic Party Night of live jazz.

How to visit London’s Museums and Attractions during...

The History of 59 Churches in the City...

London Weather and The Best Time to Visit