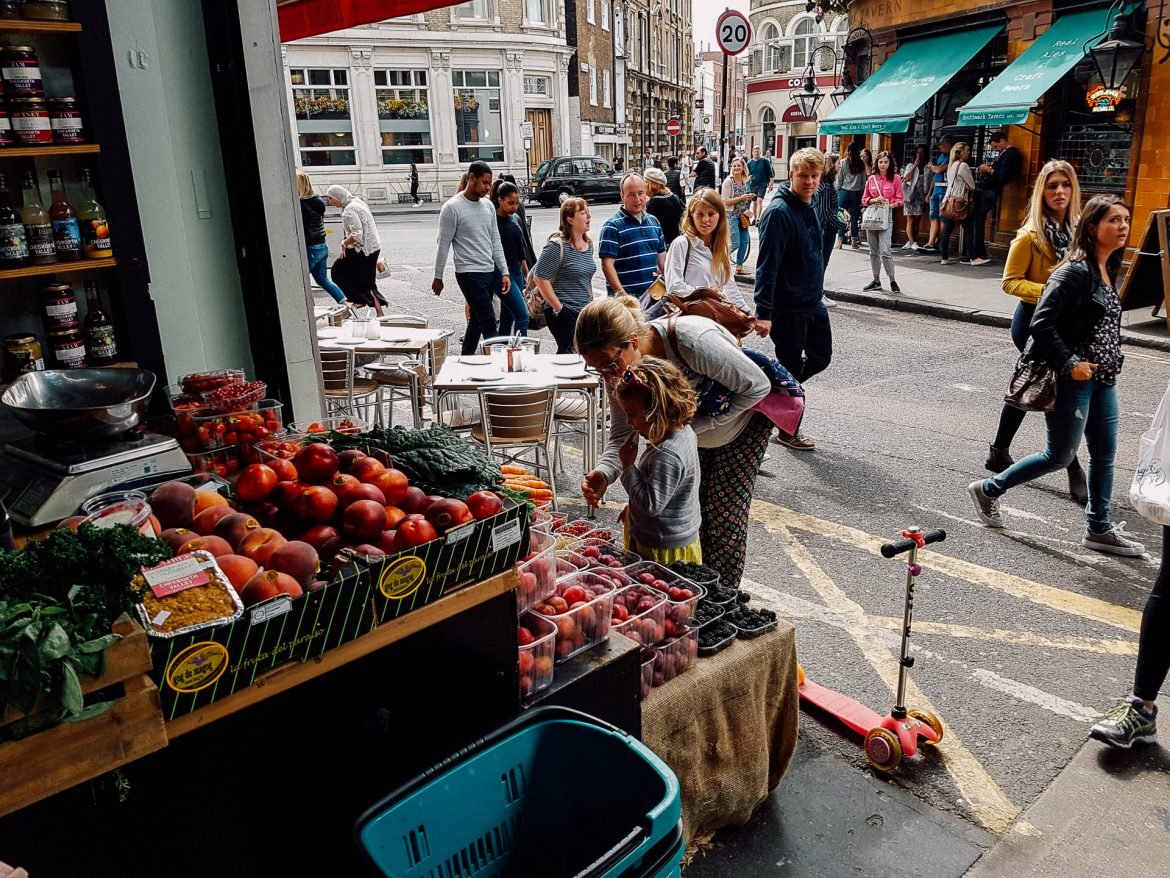 4 Foods To Try at Borough Market

Borough Market in London is like a playground for those who love their food. Indeed, your average foodie is likely to get a bit misty-eyed when attempting to describe the market and all it entails to the uninitiated.

Borough Market has existed in one form or another for at least 1000 years, although in earlier times it was located at London Bridge. In the 13th century, the market was relocated to what is now Borough High Street and the market has been in operation there ever since. It is the only fully independent market in London and is owned and managed by the Borough Market (Southwark) Trust.

Some of our favourite foods to try

Bakery: Using organic flour from Shipton Mill in the Cotswolds, Olivier’s Bakery offers the best bread in town, from spelt bread to crossaints. Our favourite: For less than the cost of a pint, you’ll get an 800 g boule of the most delicious white or brown sourdough bread.

Butcher: Ginger Pig has been a long time favourite with their organic meat from North Yorkshire’s pastures. All the burgers and sausages are made by hand, and the beef is aged for a minimum of 28 days.

Fruit and veg: Chegworth Valley is well known for its juices that are pressed from fruits coming from their family-owned farm in Kent. We love to the crisp and tangy aroma of their apples, it’s just so much better than what you get in the supermarket.

Fish and seafood: Furness Fish is getting their deliveries fresh from Cumbria every morning. Try their monkfish and we promise you won’t get disappointed!

There are 13 places to buy cheese, and most of it is sold directly by the people who made it, so you really know exactly where your food is sourced. You can sample Dutch cheese at Boerenkaas, unsalted butter and creme fraiche at Real France, or gaze in awe at the diverse artisan cheeses from all over the UK at Neal’s Yard Dairy.

One of the nicest things about visiting Borough is the sheer volume and variety of goods for sale. The meat vendors are equally diverse, with a special emphasis on organic, local, and rare breeds. Whether it is Lincolnshire sausages, wild boar, or ostrich steaks that you desire, one of Borough Market’s 14 meat and game vendors is sure to have what you need.

Something for everyone at Borough Market

Foods from all over the world can be discovered at Borough Market. Portuguese preserves, Basque chorizo, and Lebanese meze rub elbows with Punjabi chutney and Argentinian empanadas here.

4 Foods to try at Borough Market

Borough Market can seem overwhelming at first. Here are 4 suggestions to get you started:

1) Try some jamón serrano at Brindisa

Brindisa is one of the most famous shops in Borough Market, selling all kinds of imported Spanish food and ingredients. One of their specialities is the jamón serrano, which is the best of Spanish cured ham. At the counter, they have the actual cured pig legs laid out. It’s not cheap, with about 50 grams of ham costing more than a fiver, but anyone who has tried either the jamón serrano or the jamón Iberico has never looked back. For those looking for a proper dining place, Brindisa has opened a tapas bar around the back from Borough Market called Tierra Brindisa.

2) Buy some fruit and veg for the week

True to Borough Market’s history, the fruit and veg here are some of the freshest in the country and many of them are sold directly by the farmers. Don’t expect extremely cheap prices though – the majority of the produce is organic or rare varieties, and even the regular greens are a bit pricier than from a supermarket. But there’s something quaint about getting your plums in a brown paper bag from a human rather than in a plastic punnet tray from Tescos.

3) Get a hot takeaway lunch

Along with stalls selling fine food, there are plenty that caters to the hungry among the throngs of visitors they get. One of the most tempting stalls is the café by the small entrance across the road from Borough Tube Station. There’s this huge pile of prawn paella, enough to feed hundreds, just piled up high on a paella pan. Further inside the market though, there are all kinds of vendors eager to sell you your lunch, from ostrich burgers to a vegan lunch box to the standard fish and chips.

Then wash it all down with an espresso from the Monmouth Coffee Company, who serve some of the best coffee blends in London. You might have to wait a bit though – there always seems to be a long line snaking out the door of this place!

Rarely do you find so many varieties of cheese in London, with the exception of dedicated cheese shops like Cave au Fromage in South Kensington. There is a branch of Neal’s Yard Dairy here at the far end of the market, with some of the most bizarre and strangest cheeses available. For those with more conventional tastes, there are cheese stalls all over Borough Market where you can buy a slice off a big wheel of cheese.

Vauxhall City Farm: Small, but one of the...