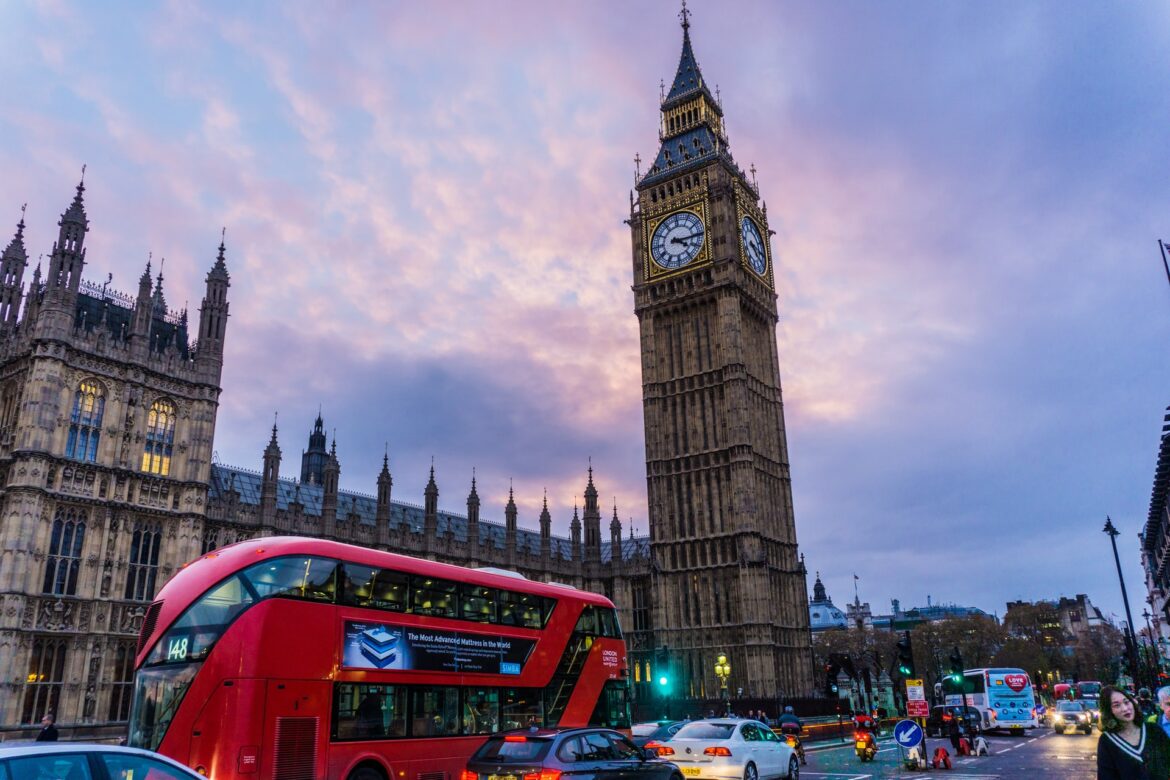 Is there a sound that assaults your senses more than the mournful tones of Big Ben striking the hour? Even the chimes of Big Ben’s smaller bells striking the quarter-hour are enough to cause everybody within earshot to cast a hurried glance at their watch to check they have the right time.

Big Ben in Central London is the nickname for the great bell of the clock tower at the north-eastern end of the Palace of Westminster in London, also known as the Houses of Parliament. Of course, nowadays, the clock and indeed the entire clock tower are known throughout the world as Big Ben.

Apart from being probably London’s most iconic landmark, the 180-year-old Big Ben is the largest four-faced chiming clock and the third-tallest free-standing clock tower in the world.

The Big Ben tower is 96.3 metres (315.9 ft) high and the four clock faces 55 metres (180 ft) above ground. Despite being one of the world’s most famous tourist attractions, the interior of Big Ben’s tower is not open to the public for security concerns. The tower has no elevator, so any escorted VIPs and the like must climb the 334 limestone stairs to the top.

Did you know that Big Ben is leaning to the side?

Big Ben’s tower leans slightly to the north-west, by roughly 220 millimetres (8.66 inches) at the clock face, giving an inclination of approximately 1/250. Due to thermal effects, Big Ben oscillates annually by a few millimetres east and west.

Big Ben was once the largest four-faced clock in the world. Today, the Great Clock of Westminster still holds the title of the “world’s largest four-faced chiming clock”. Big Ben’s hour hand is 2.7 metres (9 ft) long and the minute hand is 4.3 metres (14 ft) long.

Big Ben’s Clock Tower has appeared in many films, most notably in the 1978 version of The Thirty-Nine Steps, in which the hero attempts to halt the clock’s progress by hanging from the minute hand of Big Ben’s western face; thus, preventing the detonation of a cunningly placed bomb and saving humanity as we know it!

Some surveys have found that Big Ben is the most popular landmark in the United Kingdom. Big Ben has also been voted the ‘Most Iconic London Film Location’. All we know is, that Big Ben remains a true symbol of London Big Ben’s beauty has stood the test of time for 180 years.

And it’s not a bad place to head for when you need to re-set your watch!

OK so you want to know everything there is to know about Big Ben’s bells and Big Ben’s ‘bongs’, you asked for it!

Take an extra shot of espresso in your latte and make yourself comfortable.

• Big Ben’s main bell and the largest bell in the tower is officially known as the Great Bell.
• The original main bell weighed in at 16 tons and was cast in 1856 in Stockton-on-Tees in the north of England!

Why is it called “Big Ben”?

The bell was never officially named, but the person responsible for commissioning the bell was Sir Benjamin Hall. This may be the origin of Big Ben’s name.

Since the tower that was itself to become known as Big Ben was not yet finished, the bell was mounted in New Palace Yard, Westminster. The bell was then transported to the tower on a trolley drawn by sixteen horses, with crowds cheering its progress

As fate would have it, the Big Ben bell cracked beyond repair while being tested and a replacement had to be made. The new bell was recast at the Whitechapel Bell Foundry weighing in at 13½ tons.

At the time of its casting, Big Ben was the largest bell in the United Kingdom. It remained so until 1881 until “Great Paul”, a 16¾ ton bell currently hung in St. Paul’s Cathedral, was cast.

Big Ben cracking under the hammer

As fate would again have it, the new Big Ben bell also cracked under the hammer, a mere two months after it officially went into service.

Accusations flew from the foundry that a hammer had been used on the Great Bell that was more than twice the maximum weight specified.

For three years the Big Ben bell was taken out of commission and the hours were struck on the lowest of the quarter bells until the Great Bell was reinstalled.

To make good the repair, a square piece of metal was chipped out from the rim around the crack, and the Big Ben bell gave an eighth of a turn so the new hammer struck in a different place.

Big Ben has chimed with an odd twang (or barmy bong?) ever since and is still in use today complete with the ancient crack.

We’re sure that Big Ben’s imperfections go unnoticed today by the tens of millions of ears that tune in to Big Ben’s glorious chimes, literally around the clock!

That’s the end of our talking a lot of ‘bells’.

Let’s hope the double espresso shot got you to the end!

Is Big Ben the most famous clock in the world? Who wouldn’t be familiar with those huge clock faces and those rib-shaking, hourly ‘bongs’?

Somebody who’s never seen the BBC perhaps, or ITV’s ‘News at Ten’?

The Big Ben clock tower is a place that London’s tourists flock to and it’s one of London, and indeed the’ UK s most popular attractions.

Certainly, Big Ben’s clock is famous for its reliability…

The pendulum is installed within an enclosed windproof box sunk beneath the clock room. It is 3.9m long, weighs 300 kg and beats every 2 seconds. Big Ben’s clockwork mechanism is in a room below and weighs 5 tons.
The clock of Big Ben has an interesting feature. On top of the clock’s pendulum is a small stack of old penny coins. Believe it or not, these are used to adjust the time of Big Ben’s clock. Adding or subtracting coins has the effect of minutely altering the position of the pendulum’s centre of mass, the effective length of the pendulum rod and hence the rate at which the pendulum swings. Adding or removing a penny will change Big Ben’s clock’s speed by 0.4 seconds per day. How high tech is that?

During the Blitz, the Palace of Westminster (also known as the Houses of Parliament) was hit by German bombing, on 10 May 1941, a bombing raid damaged two of Big Ben’s clockfaces and sections of the tower’s stepped roof. Bombs also destroyed the House of Commons chamber. Despite the heavy bombing Big Ben’s clock ran accurately and chimed throughout the Blitz.

Big Ben being out of service

Like most of us, Big Ben has had a few ‘hiccups’ during its 180-year lifetime.

OK, so Big Ben has had a few ‘issues’ down the years but how iconic, how reliable, and how uplifting to know the old fellow is there! For more than 180 years, Big Ben has stood proudly over the Houses of Parliament, the UK’s seat of government.

Big Ben is like an old friend to Londoners and London visitors. Big Ben was here before us and will still be here after we are just a memory. And the regular chimes of our old friend every 15 minutes are a constant reminder to all of us that time waits for no man.

Taking young kids sightseeing in London? Check out Horseferry Playground right next to the Palace of Westminster on the Thames Path. It’s a great little playground perfect for pre-school kids to have a break from the busy streets of London.

Enjoy a Piece of Nature in Greenwich Peninsula...